Dalgety Bay - A Flank Attack From Another Part of the Burreaucracy 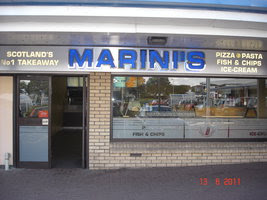 Restrictions have been placed on gathering seafood and bait from a beach affected by radioactive particles.
Warning signs are already in place at Dalgety Bay in Fife saying seafood should not be collected but new restrictions have been issued making it an offence, the Food Standards Agency in Scotland said.
The is "a precautionary measure" following recent surveys detecting radioactive items on the beach, the food watchdog said.
It added that the restrictions will be reviewed in light of further evidence or any action taken "to remediate the contamination".
Although there is no commercial fishing or shellfish industry in the area, individuals are known to collect shellfish, it said.

If one part of the bureaucracy cannot get its way bring in another. This woll doubtless then be used as "evidence" that there must be a problem because the Food Standards Agency, Scotland also say there is. An ionfinite circle of mutual support held in mid air by itself. The phrase "
a precautionary measure" rather suggests no evidence but we will see.

This prompts another FoI

Dear Food Standards Agency in Scotland,
I note that you have decided to ban fishing in Dalgety Bay, purely on the basis of the alleged finding of radioactive "radium" there. This raises a number of questions of fact and of principle which I must ask you, under the FoI Act, or any other pertinent regulation, to answer.

1 - What evidence, from the FSA's knowledge, do you have of "radium" being found on the beach? If none write "none".

2 - What background readings of radiation has the FSA made at this beach and at others nearby, as a control, and have you found the radiation level higher at Dalgety Bay? Of none and no write "none and no".

3 - Does the FSA accepts SEPA's evidence that the radiation at Dalgety Bay is "less than 2/3rds background in Aberdeen" and that this also makes it as low as 1% of the radiation level in various places around the world from which the FSA does not ban imports? If yes answer "yes".

4 - Does the FSA dispute evidence that the maximum theoretical level of radium from these dials, had all of it been deposited on the beach and none of it washed or blown away over the last 60 years, would not exceed 25% of naturally occurring radium there or 1/35,000,000,000th of the total naturally occuring background radioactives there? If you do not dispute it answer "no".

5 - If the answers are as I suggest then it is obviously impossible to honestly claim there is a real radiation threat to food there, let alone one which, if the rules are applied honestly, would not involve closing down all fishing from Aberdeenshire and points north let alone prohibiting any food imports from much of the world. If that is not currently being done the only possible reason for doing this is to deliberately promote a fraudulent scare story. Is there another credible option? If no answer "no". If there is please give it.

6 - If the answer to 5 is no is there any specific ruling applying to Dalgety Bay but not the rest of the country that prevents this action from representing the very highest standard of honesty the FSA Scotland aspire to or that would make any ruling on any food matter by you infinitely more trustworthy than this. If none and no answer "none and no".

As you will see I have gone to some pains to make it possible for you to answer this easily and clearly, rather than saying , falsely, that its all on our website, as SEPA have repeatedly donethough if any of the answers are different from those suggested please give reasons. Perhaps this will make it easier to provide an answer before the absolute legal limit of 20 working days.