In the communist era we lived in a system where politics dominated the economy, which had well-known – extremely detrimental – consequences. What we wanted when communism collapsed was to create an autonomous economic system where politics will have only a marginal role in the economy. We did succeed in changing the economic system fundamentally, central planning and state ownership were dismantled in a very short period of time, the first years were very promising, at least in our country, but politics influences the economy now much more than some of us wanted and expected.
We wanted a free market system but got the very European “soziale Marktwirtschaft”, the social market economy, which is characterized by massive redistribution, paternalism, absence of motivation, excessive regulation, government intervention in all fields, irrational support of suddenly promising but economically not viable ideas and projects, counter-productive labour market rigidities, fiscal deficits, and sluggish economic growth. Moreover, the continuously, almost linearly growing living standards come to be considered a justified claim (or entitlement), almost a human right there.
When there is a “good weather” (in the economic sense), such a system somehow functions. It produces positive rates of economic growth (although much slower than in BRIC countries) and weak, but for some period sustainable fiscal positions of individual countries. When bad weather – due to any endogenous or exogenous negative shock – comes, the rates of growth become negative and fiscal positions unsustainable. This is true regardless of how one or another economic crisis started and who or what was responsible for it.

The problem is aggravated by attempts to fight the crisis by means of huge fiscal injections into the economy to – allegedly – avoid an even greater crisis. We know that this is a mistaken ambition.

Our media are lying yet again. In this case the Syrian rising is more anemic than we are told

That same night on July 15, I received news feeds from the AFP announcing a million protestors all over Syria, of which 500,000 in Hama alone.

This ‘information’ was even more absurd due to the fact that the city of Hama counts only 370,000 inhabitants

----------
The GWPF produces a paper about the shrinking of the Sahara

The southern border of the Sahara has been retreating since the early 1980s, making farming viable again in what were some of the most arid parts of Africa. There has been a spectacular regeneration of vegetation in northern Burkina Faso, which was devastated by drought and advancing deserts 20 years ago. It is now growing so much greener that families who fled to wetter coastal regions are starting to come back. There are now more trees, more grassland for livestock and a 70% increase in yields of local cereals

Which proves the BBC were, yet again lying when they put this deathless prose about the Sahara becoming so much drier that even camel trains were no longer feasible, on their evening "news"

With a long, gurgling groan, Lakhmar fell awkwardly to his knees in the roasting hot sand outside the town of Timbuktu
For the past six years he has been making the same gruelling trek across the Sahara desert to the salt mines of Taoudenni in northern Mali.

But each journey is becoming more of a struggle.

Lakhmar, a 10-year-old male camel with a metal ring in his flaring right nostril, left it to his owner, Boujima Handak, to explain their predicament.

"It's getting more difficult because the rains aren't coming, the oases are drying up and the camels get tired and thirsty and can't continue

Reading between the lines it is clear that what is happening is the technology is improving so much that even in the most isolated place in the world lorries are making life easier. That is a positive anti-Luddite story so naturally, knowing how corrupt the obscene genodcideal fascist who make up the BBC are, they lied.
----------------
Unlock Democracy: Incorporating Charter 88. Another government funded fakecharity . Their accounts give an interesting mix of  obvious government funding (European Commission)  and genuine politically connected riches (Joseph Rowantree Trust) but the majority seems to be from government or other fakecharities. An interesting wrinkle is that they offer prizes to small donors totallying 50% of such donors donation. As they pouint out this is twice what the national lottery do and it seems difficult to believe this is economic. It will, however, give the appearance of support from many more gamblers than otherwise.
I came across them because they sent me an email asking for stories to help them lobby over the "Sustainable Communities Act" whatever that is. So another example of a government subsidised fakecharity using government subsidy to advertise for more government subsidies. Layer upon layer of spending that only enriches those with a handle on it. Not much democracy unlocked there.
-------------------
An interesting little blog about how a journalist was ofered a quite blatant bung to get a piece of PR fluff from a windmiller published. She is outarged about it and insistent that no good journalist would ever publish anything without reporting both sides. I put some comments of my own.
-------------------
The latest variant of the warming scare (Guardian making no attempt balance their lies with the truthful side) is what warmists call ocean "acidification". It is actually the ph falling from marginal alkiliinity to marginally closer to neutrality but warning about seawater becoming marginally more neutral isn't very scary. This report says

Noting that "seawater pH records that exceed a single decade are not yet available which [time period] is too short to distinguish anthropogenic and natural external forcing and fully understand natural variability of the ocean pH," Liu et al. analyzed the boron isotopic composition (δ11B) of fossil corals in an effort to reconstruct a Holocene history of sea surface pH variations for the South China Sea.

As shown in the accompanying figure, the δ11B-derived pH values for the South China Sea fluctuated between a pH of 7.91 and 8.29 during the past seven thousand years, revealing a large natural fluctuation in this parameter that is nearly four times the 0.1 pH unit decline the acidification alarmists predict should have occurred since pre-industrial times.

Head of the Civil Service bending the rules to ensure civil servants apparently guilty of massive fraud go unpunished. I suppose if we assume the purpose of government spending is simply to reward government employees rather than doing any good he is simply doing a good job. I assume that is how he feels and who will tell him no.
-----------------------
I found this googling "cameron "hug a hoodie". Does he not look scared stiff of being in the presence of such a powerful and intimidating personality 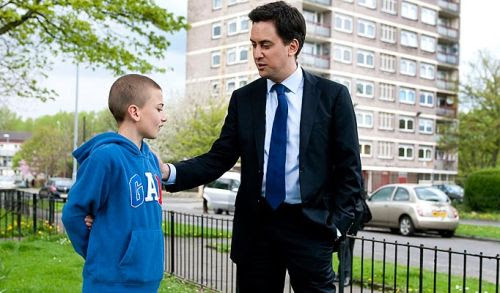 But it's fun pointing this out to people.

From your much-trumpeted OA paper itself:

"Our data are the first to show that significant variations of the boron isotopic ratios recorded in fossil corals in the Holocene may be linked with synchronous climate change. In contrast to a trend of gradually increasing pH in the SCS since the Holocene thermal optimal, modern pH of the SCS is much lower. We believe that increasing concentration of anthropogenic carbon dioxide in the atmosphere may have reversed the natural pH trend in the SCS since the mid-Holocene. It is estimated that global seawater already has been acidified by 0.1 pH unit relative to the pre-industrial times ... Further studies in this area can potentially provide important information regarding the links between changes of surface seawater chemistry and climate change."

No real quantification on how "not scary" these results are, and certainly nothing that could be interpreted as a genuine challenge to the accepted consensus that dissolving fossil carbon might just be a bad thing...

Do you actually read the papers these people try citing, or do you just settle for whatever your corporate masters spoon-feed you?