the presenter held a welder’s blowtorch to an egg that had been coated with an invisibly thin layer of Starlite. After several minutes the flame was removed, and the egg was broken to reveal that it was still raw on the inside. In another demonstration, this time on NBC’s “Dateline” in the United States, a piece of Starlite was shown to be cool enough to touch just seconds after exposure to a blowtorch

Sounds like some sort of scam. This doesn't help


a former hairdresser from North Yorkshire, England. Ward saw a news story about how most of the deaths in an airplane accident had been caused by the toxic fumes from burning plastics. Having spent time working on new formulations for shampoo and conditioner in his home laboratory, he decided to try his hand at concocting a more flame-retardant plastic, and after a series of experiments that ran from 1986 to 1989, he came up with a formula that seemed to be impervious to any sort of heat.


It would only be a matter of time before Starlite was commercialized in some form…spacecraft would have inexpensive, lightweight, and super-durable heat shields; devastating building fires could be made a thing of the past; everything from home appliances and furniture to missiles would be revolutionized by this miraculous heatproof material

It is unquestionably genuine


The sources who supplied the test results were also unimpeachable

So what went wrong. Why don't we see it? Most conspiracy theories of this nature assume that Big Business has bought up the patent to prevent it undercutting their product. Quite the reverse here. Big business showed a lamentable lack of interest until.there noses were rubbed in it by TV demonstrations. Where it broke down was on money. Mr Ward, apparently wisely, didn't patent it since doing so would have made the process public and stolen it from him (patent lawyers make big bucks by finding just how close to the patent you can reverse engineer something without infringing the patent).. This invention  was clearly worth billions. Possibly still is. I suspect that if one man can do this the process could produce variants too. None of the big companies were willing to offer billions and Ward wasn't willing to settle for a small fraction of the profits. This is from somebody who thought he was doing Ward a favour.


We brought Maurice to Calgary and introduced him to a group of investors and pitched several proposals for marketing his product including one involving the University of Calgary and the establishment of a research and development centre. That little effort cost us $80,000 CDN. My partner knew Maurice personally, and if anyone had a chance to do a deal with Maurice it was us. Like some of the thoroughbreds I have owned over the years (mostly hayburners) Maurice proved to be very unpredictable. The more we offered, the more he seemed to want. We went way beyond what reasonable investors would do, but I have a personal philosophy to help my fellow man and Starlite would help so much. But alas no deal would satisfy his continuously increasing agenda. In short, he was a moving target.

But they were clearly not talking about billions.

This is one of the holes in libertarianism as a theory. Classic libertarians tend to think that patents are an infringement of free competition and thus should not be allowed. This means that while they defend property rights as a basic social right they provide no protection to "intellectual property". On the contrary I believe that technological progress is the root of almost all wealth creation . All of the land, coal, iron , North Sea oil, etc in Britain was owned, 10,000 tears ago, by a few thousand cavemen but with a technology limited to flint aves they were not billionaires.

The same free market argument for rewarding the owners of factories and land applies to rewarding the producers of ideas, perhaps much moreso.

Currently patent law does not provide sufficient protection and business has got used to getting away with it as Mr Ward's treatment shows. The potential investor quoted above was not, by his lights, shortchanging Ward because he was doing better than his competitors. But compared to the value avaolable he was. Probably he had to because patent law doesn't give adequate protection to anybody and had he handed over billions for the patent he would have been bust as competitors worked round the patent.


In 1888 Tesla sold the rights for his AC patents to Westinghouse Electric. Westinghouse company records show that Tesla received $60,000 for his patents, and was to receive $2.50 per horsepower of electricity sold. Four years later, Westinghouse was experiencing serious financial difficulties that required a company reorganization. George Westinghouse's investment bankers advised him to get rid of Tesla's royalty contract. Given little choice by his bankers, Westinghouse reluctantly called on his friend. After explaining his problem Westinghouse said, "Your decision determines the fate of the Westinghouse Company."

By definition we cannot know how much human progress has been held back by not rewarding invention to its true value, because the missing inventions are missing. It did not prevent the invention of AC by Tesla but his subsequent history suggests several, perhaps many, important ideas were lost. Ward is obviously an example here. The single most damaging loss of progress, one that even as a believer in the right of inventors to a true reward, is the invention and hiding, for years, of birthing forceps.


Peter the Elder [1560-1631] is believed to be the inventor of the forceps. The brothers went to great length to keep the secret. When they arrived at the home of a woman in labour, two people had to carry a massive box with gilded carvings into the house. The pregnant patient was blindfolded so as not to reveal the secret, all the others had to leave the room. Then the operator went to work. The people outside heard screams, bells, and other strange noises until the cry of the baby indicated another successful delivery...

Hugh the younger Chamberlen (1664-1728), was the last in the Chamberlen family to practice the secret use of the forceps. Toward the end of his life the design and use of the instrument entered the public domain. The first illustration of the forceps was published by Edward Hody in 1734.

So for nearly a century and a half one procedure that could have reduced the agony of birth and saved millions of lives was kept a family secret because they wouldn't have been able to retain the profits.
Hopefully most inventors are less hard hearted than that but we have no intrinsic right to expect them to be. There is little reason to expect corporations funding research not to take this into account.

There is one possible answer to this , on which I will have more later, and that is X-Prizes.


HT to Fortean Times for reporting on Starlite. 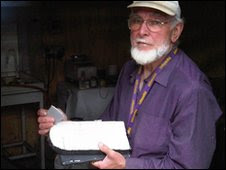 Comments:
From Sandy Henderson -this topic hits home, as twenty years or so ago I tried to get a patent on a simple life saving invention ( warning tape on the sides of the internal passage walls of public buildings which showed the escape routes and felt smooth in the desired direction, but rough in the wrong direction, so that it was useful to anyone who could not see, for whatever reason )My application failed because two groups had thought of the idea previously, but we all failed to muster any enthousiasm in those, like the RIB,or fire safety authorities,who you might think would be keen on such a simple device.Money and responsibility do not mix well, and it would be hard to assess how many lives our simple idea might have saved.

This is a great article. It reminded me of an experience I had with an invention that was related to this, something that can generate wealth. I was thinking about inventing a fishing lure that people can use or a wine storage but not sure yet. Love this post though, hope your inventions come out to serve for the greater good.

I am looking for my memories through the stories, the narrative of people. I feel it is difficult but I will try.
povaup