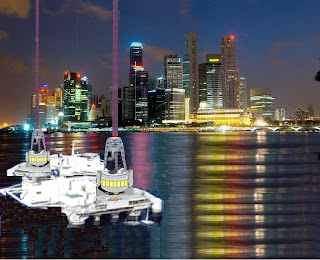 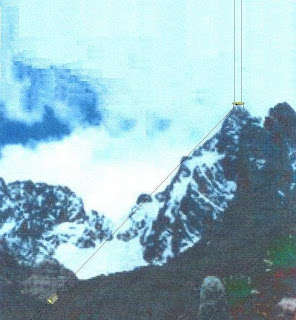 1 • There’s no doubt that the sooner a space elevator is built the sooner costs of going to and from space will come down. With an elevator, a tourist trip to LEO (Low Earth Orbit) will take 5 hours at present fast elevator speeds and has been estimated to cost per person the same as a trans-oceanic air flight instead of millions of dollars as at present. However, my own personal estimate places it at more like $25,000 a head, which is rather more than trans-ocean flights but still much less than anything orbital by rocket.

2 • At the same speed a visit to geosynchronous orbit would take a week and the estimates say will cost a similar price to a round the world air trip including hotels.

4 • In a paper called “The Space Elevator Feasibility Condition” posted on the Spaceward Foundation website in early December 2008, Ben Shelef (CEO of Spaceward who run the annual international space elevator games) shows that a tensile strength of 30 GPa-cc/g would be strong enough to create a useful Space Elevator provided the Climber power system can generate at least 1.5 kWatt/kg. A gigapascal or GPa is a billion newtons (force) per square metre (cross-sectional area of the material sample).

5 • Several years ago now Dr. Bradley Edwards (the present world expert) created 70 GPa nanotubes and in February this year Professor Windle of Cambridge University created a chain of 10 GPa nanotubes 29 km long in one day. Over 3 years we could build an Elevator now, --- if we used chains of Edwards-type nanotubes and had the funds!

6 • Dr. Edwards has estimated that the first Elevator would cost $6 billion, but that thereafter they’d cost $3 billion each as their cables could be taken up by the first then moved once in geosynchronous orbit. The reason my estimates are greater than his are that he is just considering a basic elevator hung from geosynchronous orbit with the cable extended to provide the counterweight. Edwards’ cable would be non-conducting with power beamed up by lasers that do not yet exist with sufficient power.

7 • I believe that the initial use of an elevator will be to take tourists to Low Earth Orbit (LEO) and the only way to keep a station there where they can get off and on to take rocket taxis to orbiting hotels (from where rocket ships to the Moon would take a little over 2 days) will be by having that station suspended around the elevator cable by similar cables. My counterweight would be a Solar Power Station (SPS) that would beam power down to the cars with my cable also electrically conducting as the Japanese have proposed. This requires no non-existent lasers. The cost of mine plus the SPS and the cables suspending the LEO station etc., would be around $50 billion. To repay this over 25 years would cost round $20,000 per head per round up-and-down trip whereby charging £25,000 this would still provide interest on loans and the operating company with a worthwhile profit.

8 • Earth is in a credit crunch and there are only two ways out of it, either more poverty or more new resources to back more real new money. If access to the resources is known in advance quantitative easing can be translated into borrowing against taxation on the future funding whereby higher taxes and poverty will no longer be necessary.

9 • There are enough more new resources off Earth in our Solar System to make everyone on Earth wealthier than Bill Gates in real terms. Even though that won’t happen, we could totally eradicate poverty all over our planet and everyone would gain greatly from this.

10 • The greatest cost of access to space resources is the cost of getting to and from LEO or of taking cargo up and down.

11 • While remaining on Earth humanity carries all its eggs in one basket, so space settlement is imperative to the continuation of humanity, but such settlement will only become viable with space elevator economics.

12 • Elevators will make space economic. Until the first is built space will remain an exorbitant expense, yet as soon as that first elevator is built humanity will flood out into our Solar System and it will get developed. There will be no more credit crunches for a thousand years.


Afterword: I must admit to having been sceptical about Andy's enthusiasm for near term space elevators but am impressed with; (A) "Several years ago now Dr. Bradley Edwards (the present world expert) created 70 GPa nanotubes and in February this year Professor Windle of Cambridge University created a chain of 10 GPa nanotubes 29 km long in one day" - this definitely takes us into the area of doing it now; (B) that he gives a higher cost to orbit (sect 1) than his source which shows he is not being uncritical.

$6 billion to build one is nothing for something giving us access to the universe. It is a quarter the cost of the Eurofighter or 1/4% of the British GNP for 1 year or 1/25th of America's or 30% of what EDF recently paid for British nuclear, largely to get sites which already have permission to host nuclear generators rather than for an engineering reason. This last shows it need not be a government programme, though also & unfortunately that politicians are probably still in a position to veto it.

Andy suggests Sao Tome, an island group off the west African coast as a site. I would love it to be Ascension Island but physics requires it to be almost exactly on the equator. What we can say for sure is that there are a whole range of systems which should work to get us to orbit (in energy terms "halfway to anywhere" in the solar system) for a commercial cost. When you can solve an engineering problem more than one way it is a cert at least one of them will work. Odds on they all will & we should be trying them all.