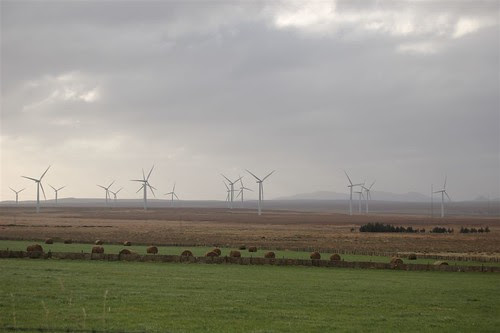 Last Sunday Ewan Morrison in Scotland on Sunday wrote an article saying how beautiful windfarms are & attacking the Caithness Windfarm Information Forum for publicising the number of deaths worldwide from windmills - 52. He is perfectly entitled to his standards of beauty & the number of deaths is not particularly high for such projects & he is entitled to say so - so long as he is consistent. I sent them this letter:

In defending windfarms Ewan Morrison (article Sunday) says that the 52 deaths caused by wind turbines worldwide are unimportant because "Wow, you'd be hard pushed to find anything that killed that few. Perhaps choking on a toothpick".

May I help him out with another example. This is the same number who died in the Chernobyl "disaster" in 1986. To be fair in making comparisons we should acknowledge that, in the years since, while producing nearly 20% of the world's electricity, a further 2 people have died in one accident in Japan. Well done to the wind industry in matching nuclear's total accident record while producing nearly 1% as much power & at only 10 times the cost.

They didn't print it which is their right & I wouldn't be making a point of it here. Firstly it was seen by 2 people whose opinion I respect & who certainly a publishable letter when they see one & they both thought they had seen one.

A perhaps more useful reason for putting this up is to link to & repeat their accident list. The comparison with nuclear is, as I said, or perhaps even a little more supportive of nuclear since it has been pointed out that the Japanese accident* was a waste handling one not directly related to power generation & equivalent to any accidents which may happen when windfarms are demolished:

More details on the accidents available in pdf here

*September 1999: Two workers are killed in a radiation leak at a fuel-reprocessing plant in Tokaimura when they try to save time by mixing excessive amounts of uranium in buckets instead of using special mechanized tanks. Hundreds are exposed to radiation, and thousands of residents evacuate. The government assigned the accident a level 4 rating on the International Nuclear Event Scale ranging from 1 to 7.

From memory there were 3 workers present - the 3rd one made a full recovery, which tends to discredit the promises from the Luddites that, though hundreds of thousands have failed to die at Chernobyl they will start doing so real soon.