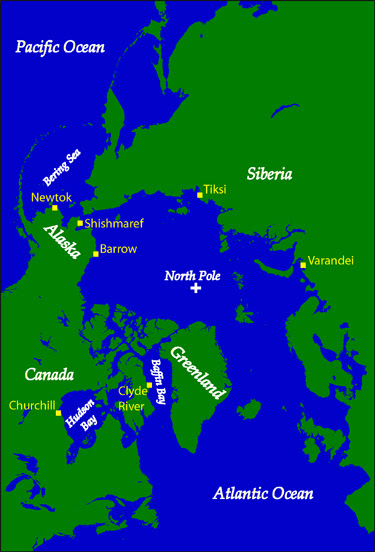 The Arctic has been ice free quite regularly in prehistory. "The arctic may have periodically been nearly ice free in recent geologic history, after the last ice age ..... the ice cover in the Arctic Ocean was greatly reduced some 6000-7000 years ago. The Arctic Ocean may have been periodically ice free" Most calculation show that if the floating ice melted it would stay melted - ice produces a roughly 2 million square mile mirror, without which much more sunlight would be absorbed rather than reflected back into space. Currently Siberia, Canada beyond 100 miles from the US, Alaska & North Norway (about 10 million square miles) are barely habitable, most of their settlements being more for mining than agriculture. With a clement climate this would change.

HOW TO DO IT
Earlier I discussed the use of orbital mirrors to warm smaller areas. For this the size would change but the principle less so. Very large orbital mirrors at geosynchronous orbit(36,000 km up), angled towards the Arctic shores (though missing Greenland) would change the temperature balance.

Statite (a portmanteau of static and satellite) is a hypothetical type of artificial satellite that employs a solar sail to continuously modify its orbit in ways that gravity alone would not allow. Typically, a statite would use the solar sail to "hover" in a location that would not otherwise be available as a stable geosynchronous orbit. Statites have been proposed that would remain in fixed locations high over Earth's poles, using reflected sunlight to counteract the gravity pulling them down. Statites might also employ their sails to change the shape or velocity of more conventional orbits, depending upon the purpose of the particular statite.

The concept of the statite was invented by Robert L. Forward. No statites have been deployed to date, as solar sail technology is still in its infancy.

So we aren't going to have it this next year but the principle is sound. Costing is impossible now but once we have a spacegoing civilisation almost all of what we would think of current costs (getting up there with thousands of tons of foil) would already be paid for. I would not be surprised if the ultimate cost could be placed at cents per acre - like the American west if you don't include subsequent inflation.

A statite reflecting directly at the North Pole would produce about 3 times as much sunlight as reaches the equator since (A) it would shine 24 hours a day, (B) the light comes straight down rather than most of it coming through extra atmosphere at an angle & (C) the current sunlight still gets in as well. Fairly quickly this would melt the ice within the target area. Then it would heat the water & since water moves around we could expect almost all floating ice to disappear shortly.

BUT WOULDN'T WE ALL DROWN
No. Firstly because there is already a proposal for getting rid of excess water by piling it up in the Antarctic so that anything but a very rapid melting can be dealt with. Secondly because 90% of the world's ice is in the Antarctic, slightly over 5% on Greenland, thirdly because the melting of floating ice does not change the volume in the water (which is why it floats) & fourthly because the idea of Greenland's melting, in less than 10s of thousands of years, is a non-starter. Greenland ice did not melt last time the Arctic was ice free indeed it has not all melted since:

"The dating of dust particles also showed that it has been at least 450,000 years ago since the area of the DYE-3 drilling, in the southern part of Greenland, was ice-free."

This is though many cycles of an ice free pole. Ice in the sea melts relatively easily because it is barely below zero & in moving water which is barely above (by easily I mean in months) & water is able to absorb or give out a lot of heat. Ice on land is on solid rock which itself has been deep frozen for the same period - the only way heat can reach it is from the air, which being much less massive than water can carry far less heat. Also the Greenland cap is up to 3 km deep. Even the most pessimistic of serious alarmists agree Greenland would take a millennium to melt.

A habitable North Pole would sharply reduce the temperature gradient between pole & equator across the Northern hemisphere. Polar bears have been around for 100,000-250,000 years so I don't think they would have much to worry about. But even more important is making this planet much more attractive to we humans who, after all, evolved in warmer climes & mainly in a warmer era.

"I think we may be a bit early dear"

Comments:
As a practical matter a communications sattelite could be placed over the North Pole to maintain contact with Siberia, northern Alaska and the far northern parts of Europe.

It would have to be a statite but from that position it would cover all the northern hemisphere virtually to the equator which must be 85% of the world's population & even more of its industry.

polar cities, google and blog on it. I am James Lovelock's Accidental Student. Polar cities are not cute sweet geoengineering things, they are doomsday lifeboats. blog on my blog at http://pcillu101.blogspot.com

Dan you are misusing Lovelock's name. Since seeing the fraud revealed by the climategate emails he has said that only the alarmists have kept the debate sane.