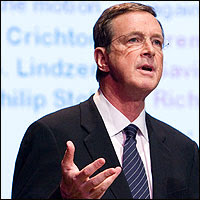 The greatest scientists in history are great precisely because they
broke with the consensus. There is no such thing as consensus science.
If it's consensus, it isn't science. If it's science, it isn't
consensus. Period.
--Michael Crichton

A review of & link to video of the New York debate on global warming in which Mr Crichton took part & in which the audience & even moreso the radio audience accepted that global warming was simply a false scare.

His book State of Fear which not only takes the whole warming scam apart but, even more importantly (chapter titled Santa Monica Oct 13 9:33) how the media use scare stories to keep us obedient.

Articles by him from his own.
Speeches from his site.

'I understand Neil Craig is a big fan of 'State of Fear' by Michael Crighton. In it a fictional character says that the book silent spring reduced the use of DDT, then more people died from Malaria than were killed by Hitler. It ignores the dangers of DDT, and that it wasnt banned, and that it doesnt work very well. Aside from this, the book does have some amusing moments. I blame the Iluminati myself, I think they have hypnotised Neil in order to distract from the profits made by global oil companies.

This is an extract from a comment stream in which you got absolutely creamed. Thought I'd just remind you of it.

Thank you for your solicitousness Mous. I have previously reported on how I got "creamed" on Deltoid.
http://a-place-to-stand.blogspot.com/2008/06/governments-chief-science-advisor.html

Specifically on how I got an eco-fascist former editor of Nature to say that Sir David King, the government's chief science advisor was only capable of a "kindergarten analysis" (the moron hadn't noticed where the statement was from).

That Deltoid felt the need to censor me from their "debate" suggests they did not feel they were capable of winning.

However I accept the use of the term "creamed" as representing the level of factual accuracy to found among eco-fascists generally - even those who are not afraid to identify themselves.

You are trying to change the subject. The subject is Crichton's errors and your lack of expertise. Anyone reading the comment stream above will find you quite out of your depth on some of the subjects you touch on in this post.

The subject you brought up Mous was the allegation that I had ben "creamed" in the deltoid debate. I produced 2 example of how that claim merely represented the very highest standard of honesty to be expected from you eco-fascists.

If you now wish to change it to Mr Crichton's or indeed my errors you should produce some evidence of their existence.