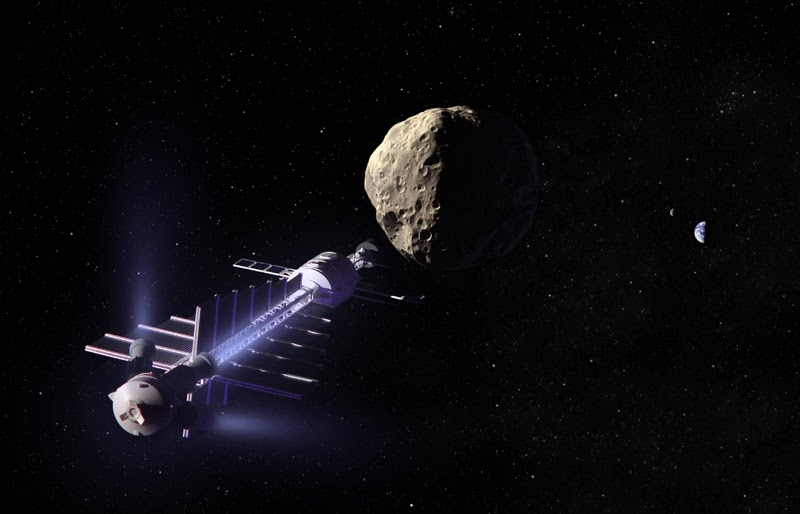 Quite a lot of designs are in process for orbital spaceships & traditional chemical rockets to get us to the Moon. Most of the immediate future will be in the Earth-Moon system involving zero-G production & solar power & Earth monitoring satellites. Nonetheless there is a lot of space beyond that. To get to Mars for a practical cost & to get beyond that at all we will need atomic rockets.

There are a lot of possible forms of atomic rocket propulsion & obviously we already use it for nuclear propulsion in submarines. The problem with chemical rockets is that we have to fetch up an enormous quantity of fuel from Earth. Just as, with a 3 stage rocket, each stage launches progressively less so the payload of a rocket to Mars would be but a fraction of what was put into orbit. On the other hand once an atomic rocket has been assembled it can use a non-reactive material, like Moon metals, as fuel & rather less of it.

In a nuclear electric rocket, nuclear thermal energy is changed into electrical energy that is used to power one of the electrical propulsion technologies. So technically the powerplant is nuclear, not the propulsion system, but the terminology is standard. A number of heat-to-electricity schemes have been proposed.

One of the more practical schemes is a variant of a pebble bed reactor. It would use a high mass-flow nitrogen coolant near normal atmospheric pressures. This leverages highly developed conventional gas turbine technologies. The fuel for this reactor would be highly enriched, and encapsulated in low-boron graphite balls probably 5-10 cm in diameter. The graphite serves to slow, or moderate, the neutrons.

This style of reactor can be designed to be inherently safe. As it heats, the graphite expands, separating the fuel and reducing the reactor's criticality. This property can simplify the operating controls to a single valve throttling the turbine.

While I am not overly worried by small amounts of radioactivity a long way away, being convinced of the hormesis effect, a system which does not involve release of any material which has been in direct contact with anything radioactive is as good as you get. While the parts, particularly the engine, would be manufactured here the ship itself would be put together in orbit & would never land.

The electric propulsion means firing charged particles (electrons, protons) out the back to provide propulsion. Depending on the speed at which it accelerates them it will not need much mass to throw. It will probably not produce a great acceleration but a small acceleration goes a very long way when there is no friction or countervailing force. The speed to which the particles are accelerated will be proportional to the efficiency of the electromagnetic accelerater hence the length in the picture shown. 1/100th of a G for 5 hours is the same as 1 1/2 G for 2 minutes so such a ship could get explore a long way on a trip of a few months. Since distance covered is a function of acceleration times the aquare of the time even a very small acceleration can suffice to get a long way if you can run voyages for as long as in the age of sail. This makes the entire solar system more colonisable than Australia was in the time of Captain Cook.

We obviously can't start building it yet but an X-Prize Foundation could start producing prizes for designing the sort of engine that will, in time, do it.

Comments:
I'm puzzled with lots of exercises. I was afraid I could not do the right time despite my hard work. I need a support person.
http://run3play.com

We have team of best Assignment provider who fully understand student problems and try to help them get over those problems. To write an assignment, it requires a lot of time to do research, good writing skills, and an excellent knowledge of the concepts and terminologies. Where most students lack time, subject-knowledge, and writing skills, Sample Assignment brings them highly qualified subject experts who can write their assignments for them at affordable rates. Our widely popular academic service known by the name “sample assignment” has proved itself to be a boon for millions of students in Melbourne, Adelaide, Perth at Australia and worldwide. Whenever need to search for 'assignment writing help', our experts will be your assignment help. The quality-assurance team, academic writers, and the customer care executives work together to produce the highest quality of assignments and deliver them prior to their deadlines. For us, customer satisfaction is the utmost priority, hence, the quality inspection team makes sure that every assignment is entirely unique and does not contain any sign of grammatical and spelling errors before reaching the client.

Whenever I came across any difficulty, I often used to search “who can do my assignment for me”, but, later on realised that there are many these type of services who promises a lot but does only a little. However, My Assignment Services is one such assignment provider who believe only in the quality. They are exactly the type of assignment service provider that I needed from a long time. By opting their services, you get assistance to a lot of subjects including their nursing assignment help, management, law, engineering, finance, economics, accounting, and a lot more. Therefore, you need not to be worry, instead go for My Assignment Services by visiting the link.

After reading this blog, I understood how students make mistakes in Assignment. However, the experts of Online Assignment Expert provide unique online assignment help . To students all across Australia. This is ensured by the multi-levels of quality checks that make the assignments error-free. Obviously, the assignments would furnish every guideline of the marking rubric.
As a student, I have availed off their services frequently as I feel their nursing assignment helpexperts are master at whatever they do. I have observed the kind of precision that they display in their work, thereby providing me with an impeccable assignment.