A VISION OF THE FUTURE 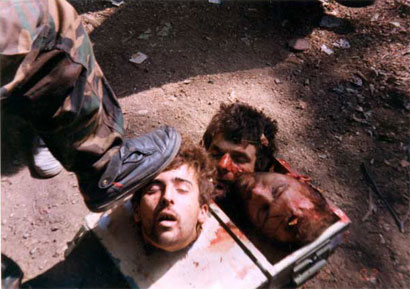 This photo comes via Pete North's blog where if you wish to see what NATO stands for, or more likely if you feel you ought to, you can see far more. It seems apt that it illustrates not only today's earlier post but also the one on Monday comparing our government's environmental fascism with Orwell's book.

Interestingly when I googled "boot stamping on a human face" it wasn't shown though many less apt ones were.

UPDATE 23/10?8
Surprisingly a Google image search for "boot stamping on a human face" place to stand - stll doesn't even show this picture here although even more astonishingly that title does bring up my later article & infinitely lecc relevant article on draining the Solway Firth!

Comments:
Further to my other comment under the 'JOIN NATO & DISSECT HUMAN BEINGS FOR FUN & PROFIT' article I submit that we need a new international tribunal of the Nuremberg trials variety to try our US and European NATO leaders, government bureaucrats and journalists who for so many years deliberately hid these atrocities from public view.

Once they are tried and convicted in a fair and open proceeding, they should be dealt with the same way World War II Nazi criminals were and hung from the end of a rope.

I also agree that the death penalty is a proper option for murder. Defending citizens against crime is the primary duty of government & if one accepts that hanging is a deterent then the government has a duty to be willing to use it. Anything else cheapens human life.

If the crimes of Fred West should be punished thus then the same must apply to those at the head of government.

I would probably agree to clemency towards some. Nobody has a right to clemency, otherwise it isn't clemency, but we are all only human.