Professor Colin McInnes head of Space Dynamics research at Strathclyde University lecture on Weds 7.30 at the John Anderson Building, Strathclyde University on on the means by which large-scale engineering ventures can offer a route to future prosperity. In particular, the delivery of long-term energy security will be explored, as will so-called geoengineering schemes to mitigate future climate change. It will be argued that the apparent near-term bottleneck in human development can be overcome by considering engineering on both visionary length-scales and time-scales.

The Royal Phil lecture last night was everything I had hoped for. Professor Colin McInnes didn't actually say catastrophic global warming was bull but he did start by saying that the last 10,000 years had been an unusually warm period & that "climate change had always been happening.

He was scathing about the ability of windmills to provide a serious amount of power & strong on the need for nuclear. He particularly criticised government for their resolute failure to sponsor research on improving nuclear over the last 40 years. In particular this has prevented the development of Thorium reactors. Thorium is 4 times more common than Uranium & it's cycle does not include the production of Plutonium & thus would not risk nuclear proliferation. More money would also have brought fusion closer by now. Active research would also have made nuclear reactors working on energy amplification more quickly available. Describing nuclear as not intermittent & as compact and scalable & that the French production of CO2 from generating electricity is 10% of ours.

He suggested the Severn Barrier as a useful addition to our power supplies.

He was also scathing about the "environmentalists" ("a powerful secular orthodoxy that says modern society must repent its ways") desire to prevent us flying on our holidays. The proper thing to do if we want to cut resource use is to improve aircraft efficiencies with designs like flying wings like this. 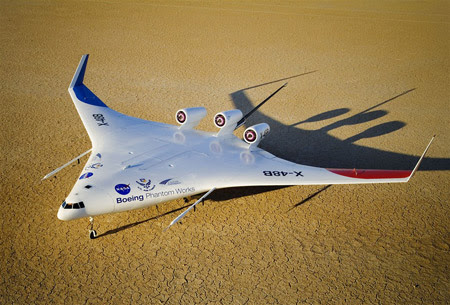 He also proposed that much of the oil problem could be solved by using the off peak power nuclear reactors to take hydrogen from water & use it as we now use petrol. In the Q&A question this produced some interesting technical questions since hydrogen is obviously far more difficult to store & produces less power per unit volume than oil (though it is also weighs less for the power produced which might actually make it better for aircraft). He did describe an experiment the USSR did years ago in fitting out 1/3rd of an aircraft as a hydrogen tank & flying it successfully.

Instead of subsidising windmills in underdeveloped countries we should encourage them to use coal, possibly with carbon capture. Trying to get them to use windmills merely guarantees their continued poverty.

Ways of cutting CO2 suggested were fertilizing the oceans with nitrogen, putting SO2 crystals in the atmosphere as happened naturally when the 1991 Mount Pinatubo eruption did, reducing temperature by 1/2 a degree worldwide. A longer term option is orbital reflectors which would cost 0.2 of annual GDP, which is affordable spread over a century, & which would use 20 million tons of material, same as the 3 Gorges dam.

An arguably greater risk to our environment is asteroid strike & in this instance he mentioned the Aphosis asteroid which runs no risk of hitting us in 2030 when it next returns but might then be deflected to do so next time. To change its orbit now would use far less energy than to do so after 2030 - should we act now or wait & see whether it is necessary to do so.

He also describes Solar Power Satellites, a Space Elevator & terraforming Mars describing them either as hubris or manifest human destiny (depending on whether you believe there are Things Man Was Not Meant To Do).

The role of government in financing this was discussed & he pointed out that in engineering & cost terms developing North Sea oil was as big a project as the Moon landings.

However all this depends on the sort of individual freedom of thought & action that the Enlightenment was about. The greatest risk to the human future is the rising tide of bureaucracy & government control. We in Britain are particularly far down that road having a government of scientific illiterates, unlike France where they achieve major engineering feats because they have a government which respects such things. I understand that the entire Chinese Praesidium are engineers of one sort or another whereas if you look at Britian & America's Parliaments they seem to be mostly lwyers or people who have never had a job outside politics - or both.)

My former MP Maria Fyfe asked an apparently sincere question - How do we get scientifically literate leaders, to which there was no readily available answer. While I have previously dealt with her & she proved to be an even more enthusiastic genocide supporting corrupt Nazi than the average Labour Party member (letter 12/10/1) it was a good question which I may address in future.

Comments:
Not all are true. Everyone has their own way of thinking but I think they have to reconsider. I like to argue for the most accurate results.
http://fivenightsatfreddysplay.com