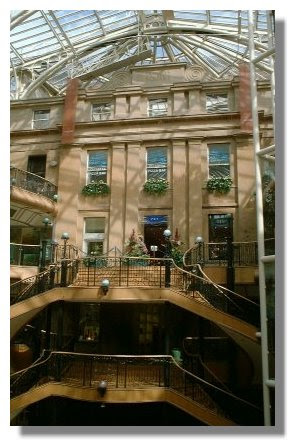 Princes Square, Glasgow used to be a small rectangle off one of Glasgow's main shopping streets but pretty run down. Then they put this roof over it, added escalators & put in balconies around what used to be upper floor windows & opened those windows as shops. Now it is a very posh shopping area.

And today the leader of Leeds City Council told Glasgow: "Go for it."

Councillor Andrew Carter said: "I know Buchanan Street well and this could present a real opportunity for Glasgow.

"What we did in Leeds was put a roof over two areas of the centre, turning it into an arcade. It is not as wide as Buchanan Street, but it has been hugely successful."

And indeed in 2006 I suggested something more extensive:

The effect everywhere of keeping the weather out has made places more attractive ever since the Victorians started roofing over main railway stations. Indeed the world's first shopping mall, Southfield 1954, was largely done by roofing over an already existing centre.

My main complaint is that when these have been done in recent years they have been vastly overengineered to look like the Crystal Palace. The roofing over of the British Museum courtyard was done so that every piece of glass was a different size & fitted together in only one way.

The effect is undeniably awesome but it plays down the extent that modern mass produced materials could do it for a fraction of the cost & weight. 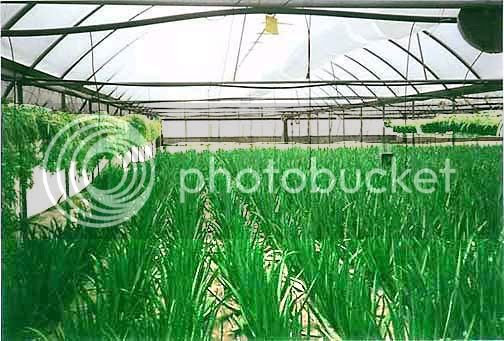 This is a large commercial greenhouse which apart from carrying its own weight is carrying piping to spray water on plants. If this is being done cheaply across the world then it would be possible, if it was being done by engineers more than architects, to keep the weather off popular pedestrian areas everywhere. Not roads in use because of car fumes, though even there pavements could be largely enclosed for even less cost. In warmer parts of the world where lack of shade is a greater problem than rain, mirrored roofs instead could be used. Not normally a problem here.