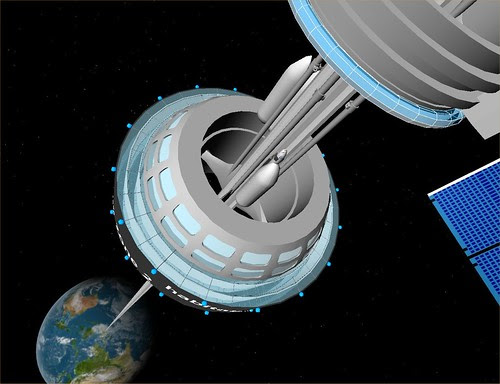 Space elevator refers to a structure that reaches from the surface of the Earth to geostationary orbit (GSO) and a counter-mass beyond (or other planets but lets not get ahead of ourselves).

Not feasible yet but we can currently make short nanotube carbon molecules & once they are long enough they will be strong enough for a 36,000 km long rope to hold its own weight plus cargo. A nanotube is a form of carbon molecule (as diamond is) originally shaped like a goedesic dome & then extended & extended more.

The Japanese have announced interest in being the first to develop a space elevator with a potential US$10 billion project to produce the necessary carbon nanofiber and then a space elevator.

......in total it's believed that more than 300 scientists and engineers are engaged in such work around the globe.

NASA is holding a $4 million Space Elevator Challenge to encourage designs for a successful space elevator......

"At present we have a tether which is made of carbon nanotube, and has one-third or one-quarter of the strength required to make a space elevator. We expect that we will have strong enough cable in the 2020s or 2030s," Tsuchida said....

Although the Japanese association has set a time frame of the 2030s to get a space elevator under construction -- and developments are moving quickly -- Hoffman acknowledges that it could be a little further away than that."

Such a structure would have to be built in orbit & then lowered to the equatorial landing point. This means we would have to have a significant spacegoing capacity before starting building it. I also think it might well turn out that lengthy nanotubes will turn out to be more easily constructed in zero G, something we already know to be the case with crystals, because gravity distorts during construction. We also need a balancing weight to ensure that the centre of gravity is at the GEO point. This could be either 36,000 km more of tube or, more credibly, a large rockie asteroid or some mixture thereof. This, even more strongly presupposes we already have a serious spacegoing civilisation before we build it so this is most definitely not an alternative to a commercial shuttle.

A corollary of Heinlein's statement that low Earth orbit is "half way to anywhere" in the solar system is that if there is an extension going outwards from the GEO point it becomes possible to launch vessels essentially by letting them "fall" outwards using Earth's centrifugal force to let them go. Since Earth rotates once every 24 hours it would be possible, by varying the time of release & how far up the cable it was allowed to "drop" to launch at least daily to any point in the system.

Also worth pointing out that once the technology has been created for one Space Elevator a 2nd & subsequent ones will be far cheaper.