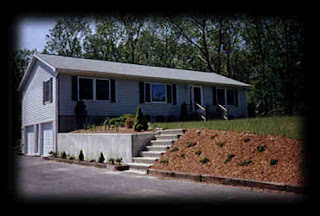 This house is available for £39,000 ($68,500). It is named the "Sherwood" & is can be bought in the US for that. OK granted that doesn't include VAT, putting it in place & the land. On the other hand you can get land over most of Scotland at £5,000 an acre which, with 6-8 plots an acre will add about £1,000. I suspect shipping it over here would add several thousand though, obviously, if it there were an established market in the UK we would already be building them here. Beyond that the purchaser's job is

"Excavation, water and sewer/septic.
Installing the foundation so that it meets the specifications of the supplied prints.
Installing a single 2x6 pressure-treated sill on the foundation.
Preparing space on the site to allow storage of the house modules on the lot.
Preparing space on the site for the crane on the day of the set.
Disposing of the plastic and scrap wood removed from the house modules by the set crew.
Drywall touch-up after the house has been set (the house will be all drywalled and primed white in the factory).
Installing drywall in all archways and passthroughs between modules.
Seaming the carpets in all the archways and doorways in the mating walls.
Re-shimming the exterior doors (this is not always necessary).
Re-shimming the interior doors (this is seldom necessary).
Installing and trimming out all interior doors associated with the mating wall (Materials provided by Manufacturer).
Installing porches and decks.
Installing the heating system including the baseboard loop as well as all other basement plumbing (all Plumbing is stubbed through the floor by the manufacturer).
Installing the bathroom roof vent (unless the house configuration allows it to be installed by the manufacturer).
Applying insulation to the floor-joists between the basement and the 1st-floor. (Required in most states).
Installing the basement stairs."

Which looks to me to be comparable with this

Except that you can't do it. There is no way that if you bought an ordinary piece of land you would get permission to build. Don't try it without schmoozing all the right councillors & officials.

The ideal should be to let people build except in areas of particular historic or scenic interest. The default position should be for freedom. Freedom to build would mean an end to shortage & major drop in prices.

Unfortunately this would mean negative equity for a lot of people, most of whom, while they were gambling on house prices rising do not really deserve to be broken because the government change the rules on them.

What I would propose is that we should change the rules as above but introduce a £10,000 charge for any new houses built, paid when they are sold. If house building went up to about 600,000 a year this would raise £6 billion. This money should be put into a fund to compensate 75% of the reduction in value, beyond the first 10% fall, of any house from its original purchase price. It is reasonable to expect anybody to pay the first 10% fall just as they would have had to pay rent. It is important that the compensation be from the purchase price not from the top valuation - if it has gone up in value 10 times since you bought it & then drops 3 times you have no reason for complaint. Care should be taken to stop fiddles like selling the house to the kids in a falling market & then letting them get compensation.

I don't have figures for how much such compensation would be possible but theoretically if we assume average houses have doubled in value since purchase & could drop to 1/3rd compensation could amount to 0.75 X 16.7% or 12% of the value of all housing. This is far more than £10,000 on 2% of our housing stock annually but (A) there is no possibility, even in the worst panic, of more than a fraction of these houses being dumped & (B) a house price fall of 67% would require expansion of the new builds to a lot more than 2% of the market. I suspect the £10,000 surcharge would actually be considerably more than needed but better safe than sorry.

The effect of this would be to slightly slow the price drop while providing a safety net which would keep people & indeed building societies solvent. Even in the worst possible case they would get nearly 75% of their money back, which is arguably more than they deserve since lenders, knowing the business better than the ordinary punter, must have known for decades that house prices were a racket on which they got rich. It would provide no safety net for those who had taken out a 2nd mortgage & blown it, nor for those who lent it to them - nor should we.

My guess is that, after a few years, the prices would stabilise at the lower rate. Far more & far better houses would be built, though with fewer workers (I am not one of those who believes "labour intensive" is a good thing). Houses would cease to be an "investment" which would free a lot of money for real investments & indeed a lot for just spending. Over several years following the stabilisation & normal effects of inflation few people would need compensation & the surcharge should, over time, be reduced & ended.

A variation, particularly for the south of England where there is a genuine shortage of non-urbanised land, would be to put a major degree of Land Value Tax into council taxes. This would discourage sprawling houses without having bureaucrats coming round & enforcing it. I strongly believe the price system is a morally superior way of encouraging lifestyle decisions than force.

Comments:
I'll have to check the maths of that, but hurrah for LVT (which I see primarily as a replacement for a shed load of other shite as I may have mentioned before).

You aren't mentioning mobile homes in the US. Take a look at this site, which sells nice mobile homes:

Mobiles are built offsite, trucked in and either ground set or simply set up on short concrete pylons. The mobile can then be quickly wired to the local electrical, sewer and water grids in under a day. If you want a view of US housing prices look at this website:

It is one of many websites that access the multiple listing service in my state. It is not the best site but it will allow you to search by area, price and features.

Thanks Ronduck. Looking at these sites it is clear that "mobile home" is more a legal classification than a physical one since these buildings once set down, aren't going to be moved. Being "mobile" gets them round housing regulations which reinforces my point that housing costs are overwhelmingly regulatory & little to do with manufacturing costs.

(One niggle about most US sites is that while they advertise being awfully cheap the bottom line is usually missing & you have to contact them for it. I understand the sales logic of that but it is a pain.)

Mobile homes used to be exempt from regulation prior to about the early 70's since mobiles were rare and were literally trailers. Since mobiles are mobile between cities and counties they couldn't be asked to comply with the 3 different building codes that are in force in different parts of the US, so the Federal Department of housing and Urban Development imposed a national building code for mobile housing. Also, most mobiles are not ground set and many of the older ones (30+ years) may have been moved once or twice, especially as they begin to show their age. Instead the owner will often simply have the mobile parked on a lot, have the axles and tongue unbolted and the entire trailer is supported by cheap concrete pylons that are about 12"-16" high. Plastic skirting is then placed around the mobile and a set of stairs, or a cheap deck is placed in front of the door.

When I was in kindergarten (around 1990) I lived in Klamath Falls, OR in a trailer that had to be at most 10'x45' and was at least 30 years old. The trailer had no hallway, instead I had to walk down the center of the trailer through each room. The trailer was so old that it had no heating, so the owner actually installed a woodstove in the front room. It used to get so cold in that trailer in the morning that we used to turn the electric oven to 'broil' in the morning and stand in front of it with the door open to warm up. Nowadays many incorporated areas won't allow trailers that old to placed, so now most of them end up in out in county areas where rules are often laxer and land is usually cheaper. Also, most mobile buyers now are actually upper working class or lower middle class, and as such want something that doesn't make them look like 'trailer trash.'

The reason many mobiles are awfully cheap is because the land is often sold separately. A company selling new mobiles will gladly deliver it to your land and set it up for you, or they may sell you the land if you want them to. Also, mobiles often go down in price like a car instead of up in price like a house, because they can be pulled and replace easier than a site-built house.

If you have any more questions please feel free to ask.

I wanted to post this on your members -only party blog, but have you heard of the Ambassador bridge in Detroit? It is completely private and supported by tolls, as are most bridges along the Detroit river. Here is its' website:
www.ambassadorbridge.com/

And here is its' wiki page:
en.wikipedia.org/wiki/Ambassador_Bridge

The bridge was not privatized but was actually built privately, and is still privately owned. This could be a model for the Forth bridge in Scotland that you blogged about.

Thanks - the original Forth Bridge, while publicly owned, was a toll bridge & did pay for itself. The fact that the new one is costed at £4.2 billion when the old one cost £314 million in today's prices (£19.5 at the time) means that there is no way a toll would pay for it. It would have to raise at least £240 million a year just to pay the interest which is £22 per crossing). Being cynical I suspect part of the reason for removing tolls is to conceal how much building costs (including government paperwork) have gone up in the interim.

On the other hand tunnels have, at least technologicaly, got much cheaper recently due to hydraulic blasting. They aren't as pretty as bridges but they are the way to go.

Houses are indeed the only goods, apart from paintings by dead people, that go up in price & both for the same reason - tight restrictions on making more when the demand rises. I would like to think that someday the idea of replacing your current house with an up to date model will not just be the privilege of "trailer trash".

I don't actually take posts on the 9% growth blog - it being essentially an advertising medium - on here I can relax & let my hair down.