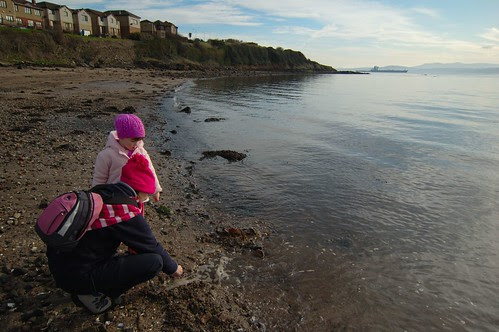 The BBC have had as their #1 story in Scotland today that there are 7 radioactive hotspots at Dalgety Bay.

Local people are worried Dalgety Bay may now be placed on a new register for radioactively contaminated land.

It follows previous monitoring over a number of years which found dozens of hotspots, thought to be the legacy of luminous dials from wartime aircraft.

I have written on this previously & have seen nothing to change my initial belief that this is natural background radiation. As normal the reporting gives no figures of the extent of the radiation, though, if it can be blamed on numbers painted on dials 60 years ago it cannot be much. Clearly it is not remotely comparable to the natural radiation on Guarapari beach which causes no problem. Something that reinforces my belief is that the radio reporting said that 7 contaminated areas ranged in size from a grain of sand to a small rock, neither of which sound like a paint particle.

They also reported the same at Aberdeen beach some time ago. A fertiliser manufacturer in the 1960s & 70s got the blame for that one.

Basically just another example of the BBC playing up a non-story to promote fear & their Luddite cause.

And by comparison this is a link to a story from Russia Today during the Republican Convention. They played up the nearby Ron Paul Convention which was wholly missing from BBC reporting. Estimable though Mr Paul's position may be it clearly does not compare with the official Convention & the Russians should not have given it as much coverage. Nor is it wholly unimportant since he did get a significant vote & the BBC were wrong to ignore it. Neither Russia today nor the BBC actually said anything untrue but gave completely different impressions, which is how it is done. If we must have bias I much prefer the Russian media bias in favour of libertarianism to the BBC bias in favour of fabricted scares & ever more state regulation.

Comments:
It just needs one chap with a geiger counter to pootle around all the BBC sites in the country, and shriek with outrage when any reach any arbitrary scream-level of radioactivity.

The bbc is pro NuLabor in spite of serial incompetence and excuses; and anti Scotland and England because they both have long ago given up Bruin and demand recognition.
I am only sorry that the bbc are festering trouble between Scotland and England, and a lot of people are taken in by their lies and innuendo.

Ewan's link is to a Bosnian Moslem who got 3 years for atrocities of which the gentlest was murder.

Though the only atrocities mentioned in the article are against Serbs it is also mentioned that our Croatian Nazi friends also thought he had go off lightly so I assume he had also been charged with murdering some of them. Bosnia was a 3 cornered war & most of the non-Serbs charged were involved in the Croat atrocities against Moslems or vice versa. To be fair they were some of the worst with villagers being burned alive, particularly by our Croat friends.

That is where the term "hotspot" is so useful Dearime - by its nature background radiation is fairly random so there is bound to be a spot that is "hotter" than others & that is a "hotspot". If the media don't give figures & they never do then, as with Dalgety Bay which was all 1/3rd less than Aberdeen streets it need not be "hot" compared to anywhere else.