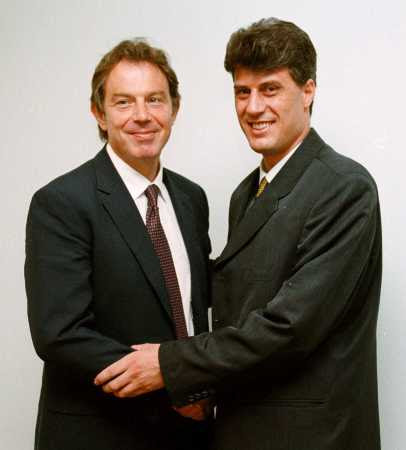 Thaci is the one on the right.

I don't warrant this as being more than gossip & it has not received any dead tree coverage. On the other hand if there is anything to it at all the people & even more the air force who were being used to bomb Serbia to help this openly genocidal monster (I mean the Albanian leader) ought to know.

"Former Clinton Secretary of State Madeleine Albright, an adviser to the Barack Obama campaign and godmother of chief Obama foreign policy adviser Dr. Susan Rice, carried on an affair with Kosovo Prime Minister Hashim Thaci in a flagrant abuse of her office. WMR has received further confirmation from well-placed sources in Croatia, Serbia, and Kosovo that Albright had Thaci at her virtual beck and call for sexual encounters. Thaci was in his late 20s and early 30s when he was having the affair with Albright, who was in her sixties at the time"

The Clinton regime does seem to have expected & normally got an enormous amount of blatant lying & cover up by the western media over Yugoslavia which may explain why Hilary thought she could get away with her "landing under fire" lie. I don't think this could have gone unnoticed so we should expect either some fulsome denials or some "non-denial denials" as they said in the Nixon era.

This is like something told about one of the more decadent of Roman Emperors (Caligula comes to mind). If there is anything to it & I have underestimated the depth of western behaviour over Yugoslavia several times before, then it must be aired. If there isn't & it has been made up that must be aired too.

Only a low life fascist sewer rat like Hashim Thaci would screw such a hideous looking hag to further his political career.

Where did they meet, at the necrophiliac vampire-cannibal ball for NATO officials in Transylvania?

Fair play to him. To make such a sacrifice for your country.

Sorry,I forgot to mention that I noticed a typo in your heading.

The fascist war criminals' names should be spelt 'Albright' and 'Thaci'.