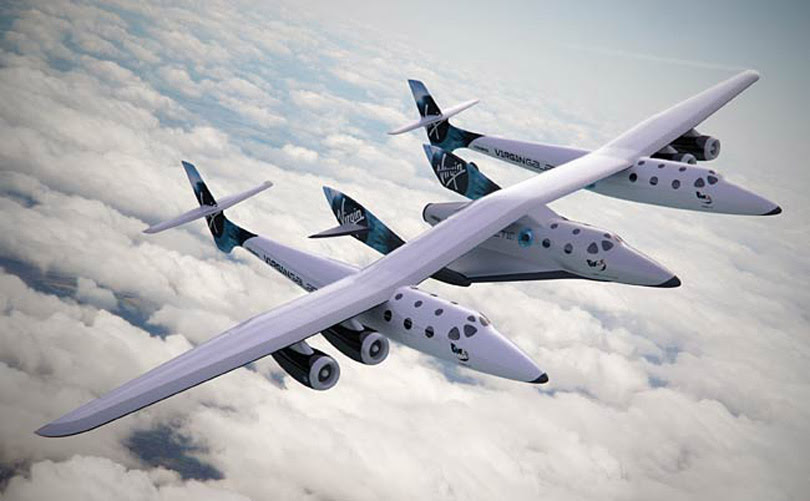 
This is more from the evidence given to Parliament's science & Technology Committee 21st Feb 2007. This time concentrating on Will Whitehorn, President of Virgin Galactic:

"The X Prize was fundamentally important to the future of space flight. It proved that a man called Burt Rutan, funded by Paul Allen, for US$30 million could put two people into space in the space of two weeks with a reusable vehicle which came back with minimal environmental exposure of the planet to the effects of that space flight. It was a very, very dramatic event.

......we are three quarters of the way through the construction project to build SpaceShip Two. This is a unique system. It is using some of the most advanced materials technology in the world, an all carbon composite aircraft which is incredibly efficient and going to be a showcase for both Airbus and Boeing, since neither are capable of building an all carbon composite glider at the moment the size of what we are building. The spacecraft itself is again all carbon composite, has a new design and a very safe hybrid rocket motor which is again unique technology that has been developed for this project. It has something called a feathering device which allows a care-free re-entry back into the earth's atmosphere which has never been done before. You do not have to try and fly a flight profile back in, you can bring your passengers in safely floating down a shuttlecock and then you turn it back into a glider to land.

The unique thing about this space launch system is it can not only get six people into space for an environmental effect less than a single business class ticket to New York compared with the Shuttle which takes that number of people into space for the same environmental output of the entire city of New York and its industry for nearly a week. This is really a dramatic breakthrough. The exciting thing about it is not just space tourism, not the fact it is inspiring people, not the fact that over 15,000 kids in the last five days have been through the Science Museum and sat in our mock-up of the interior and been inspired by it, not the fact that 100,000 kids in Britain alone sent emails to Virgin Galactic wanting information about what we are doing, not the fact we believe we can make a profitable business out of space tourists to start with, not the fact that we are not being funded by any government to make this $200 million investment, but the really exciting thing is this system is capable of doing science and payload in space. It is capable cheaply of doing microgravity experiments. It is capable of having a launcher attached to it, apart from the SpaceShip Two launcher we are designing at the moment, which could launch space satellites into orbit.

Mr Whitehorn: It is not a sales pitch; it happens to be the reality of what we are doing.

...First of all, the cost for the early flights is $200,000, around £100,000, and we have 200 people who have paid that deposit and signed up, which is about so far 10% of the investment we are making in building the system. It has been very gratifying they have done that.

.....At very low cost we could develop a space tourism business here for summer operation. I think that would be a great thing for the UK to participate in. Already you have countries like Sweden which moved very quickly on this. Dubai is trying to get into this act very quickly. I think the UK needs to and we need to look at some enabling legislation through Parliament to make sure that we can do what we do, otherwise we will have to do it under a military licence through the MoD in some way and that would be a shame for a project like this. Enabling legislation is the main thing needed because the space port facilities for the type of system we have exist at a number of RAF bases in places where they already have cleared airspace at the extremes of the UK, in the far west of Cornwall and up in the far north of Scotland.

...... We have the SpaceShip Three concept already in our minds, and a SpaceShip Four beyond it, but we have to walk before we run."

Note the stuff about microgravity experiments & the craft being able to carry its own launcher. Though there are many clear profit opportunities in space (tourism, solar power sat elites, asteroid mining) I suspect the greatest opportunity will turn out to be the ability to manufacture materials in zero gravity. In a gravity field many materials do not mix well & crystals are distorted by it. A simple example is metallic foams. Girders created full of air bubbles will be a small fraction of the weight of normal ones & a large fraction of the strength but in gravity bubbles in metal float to the top.

The range of possible materials that can be made in zero G are theoretically greater than all the materials we can currently make & it is a statistical certainty that very many of them are going to be immensely valuable. Unfortunately we cannot know which ones & how valuable till we have made them. That is why Mr Whitehorn correctly says that the greatest thing about their craft is that it will enable them to carry a payload & do microgravity experiments in zero G.

The 2 unfortunate things are; (1) that about 1/3rd of the session (inc most of the 3rd page) was taken up with concern about "environmental" effects, which Virgin were keen to placate, though I do not believe such people, really being Luddites pretending to be environmentalist, can ultimately be placated & ; (2) that this was over a year ago & little government action or media interest since then has been apparent.