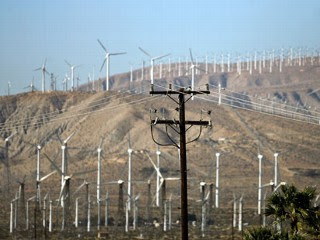 What is Gordo up to. Only a few days he said the world needs 1,000 more nuclear reactors & Britain should play a part, though only by allowing foreign companies to build them, definitely with zero government subsidy.

Thousands of new wind turbines could be built across the UK as part of a £100bn investment in renewable energy that could create hundreds of thousands of new "green collar" jobs, Gordon Brown announced today.

The prime minister unveiled what he described as a "green revolution" and "the most dramatic change in energy policy since the advent of nuclear power".

He wants to build up Britain's clean power supply in order to reach the EU-imposed target of producing 15% of the country's energy from renewable sources by 2020. This will require £100bn of investment from the private sector, which the government will encourage with financial incentives

This will, we are told, mean higher electricity bills.

No "financial incentives" for nuclear, correctly, because it doesn't need them. But how much more obvious could he be in showing that windmills [hoped to be 14% of our electricity at £100 billion] compared to an unnamed but clearly large part of our power [at zilch] are not a good option. This works out at about £7 billion per GW of windmill power whereas internationally GW nuclear reactors have been built for $1 billion (£500 million) & as

Brown estimated that the renewables programme would generate around 160,000 jobs, and plans for new nuclear power stations around 100,000,

proves the running costs of windmills will also be far higher.

This is the time for the Tories to say that they have looked at the figures, done a "serious reappraisal", "been willing to admit past errors" etc etc & accept that nuclear is affordable, CO2 free & actually works & that it is government's duty to ensure the lights don't go out so we should go for it in a big way. Gordon came close to outflanking the Tories on going for nuclear in the first place. Now he is fumbling the ball while being open about how very expensive such a fumble is.

I think this would work partly because people are not as convinced of the infallibility of any politician as long as they never admit an error & even more so because it quite clear from polls that the public themselves are going through such a reappraisal of windmillery & nuclear.

The Tories could now take back the place as economically competent on this subject. It would mean ditching their friendship with the Green party but not with true environmentalism since nuclear can correctly be sold as CO2 free non-polluting & with the advantage that it doesn't disfigure the countryside. They can therefore maintain or even enhance their position as the true environmentalists while no longer leaving themselves vulnerable to the inevitable stab in the back by the Green leaders who are universally unappeasable Luddites & bureaucratic pseudo-leftists.