Saving the Scottish Fishing Industry - And A Few Whales

So said John Martin when introducing a method of ending the "threat" of global warming. Indeed it is 1 of 4 separate ways of doing so, that do not involve closing down human progress - all of which would work and all of which are anathema to the "environmental" movement.

But like so many new ideas, they are found to be useful for reasons other than the problem first thought of .

Martin's plan was to use that iron, in solution, in deep ocean waters, as fertiliser. The oceans are, except in areas where nutrients are carried near the surface, relatively empty of life because the nutrients, being heavier than water, sink to the bottom. Trace elements of iron can allow the growth of many thousands of times its own weight of plankton. Martin' realised that this plankton, like all plant life, is created from carbon from CO2. That if it is grown it will tend to sink to the bottom itself and thus that the carbon will will be kept out of the eco-system down there for at least 10s of thousands of years. If you think we have too much CO2 that would be a good thing. Eventually, despite an enormous amount of foot dragging from the alleged believers in global warming a relatively small scale experiment was done and the portion of sea used did turn from blue to green.

However a Red Indian tribe, the Haida, on Canada's west coast came up with another use for this. They harvest salmon which had been scarce and small recently and they figured that a massive increase in the plankton the fish feed on might help. So they paid scientist Russ George  $2.5 million to try. Even, or perhaps particularly, the "environmentalists" most opposed to trying the experiment admitted

"his actions created an algae bloom in an area half of the size of Massachusetts that attracted a huge array of aquatic life, including whales that could be “counted by the score.” . . . 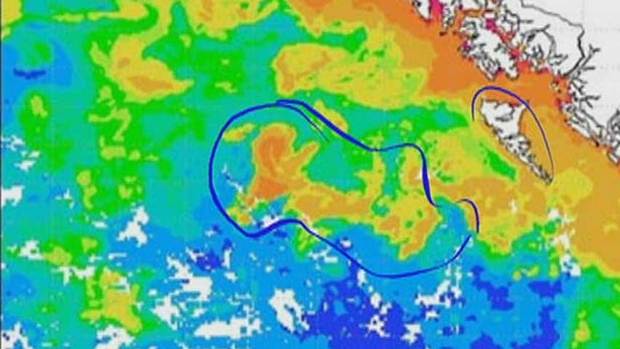 The runs of sockeye salmon that were expected to return to the Fraser River in 2010 were forecast to be the lowest numbers in all of history. Out of the blue, instead of the dwindling 1 million sockeye expected the world watched in amazement as 40 million of the fish returned, the largest sockeye return in all of the historical record. . . .


What we know now [to be] the reason for the historic 2010 sockeye run is that during the summer of 2008 as the young salmon swam to their ocean pastures a volcano erupted in the Aleutian Islands of Alaska. For a few days the volcano erupted throwing a vast cloud of volcanic dust into the air. ....As the dust drifted in the wind and settled onto the Northeast Pacific the life-giving mineral micro-nutrients it carried [were] . . . nourishing and restoring the ocean pasture as vast blooms of plankton turned the ocean from blue to green. The young salmon of 2008 arriving on these rich pastures were nourished, survived in great numbers, and gained strength and endurance to continue the all-important ocean cycle of their life. If there were question that the fortuitous volcanic dust was responsible for the apparent cause-and-effect benefit to the sockeye salmon one only needs to look to the second-largest sockeye-salmon return in history. That second-largest run of sockeye was the 1958 return which followed two years on the heel of another rare Aleutian volcanic eruption.

And like them we would now have their example if we did the same.        The circled seeded area in the map above is about 300 by 100 miles. That would be about 1/3rd of Scotland's coastal waters so we should expect seeding it annually would cost about £4.5 million. Simply repeating the experiment to prove it works again here would be £1.5 milion.        Scotland's current fishing industry is worth about £500 million a year to us so even on that basis it is an investment well worth making.         Bearing in mind what used to be caught, the potential is many times that

Who should pay for it. Well firstly it would clearly be a good investment for Scotland even if we paid it all.        But though about half the non-Mediterranean fishing territory is in Scottish waters the results are different.

So on that basis the EU should be doing it as part of the Common Fisheries Policy. Indeed the CFP administrators had a budget of E931 million back in 2004. One might expect that something that could get stocks back to what they were in 1970 when the first CFP rules were established (18 months before Britain joined, making them a fait accompli then) would be the very highest priority for some of that money.     Possibly I am cynical but I suspect that the EU won't do it. Partly that might be simple bureaucratic inertia. Part of it might be the general pseudo-environmentalist objection to anybody doing anything. Their opposition to doing anything that might cut CO2 without restraining human progress has already been alluded to.      It may turn out that those who wish to save whales will, in this instance, support a process whose side effect would indeed be feeding them. It may turn out that they don't. If the second, Brussels bureaucrats might well be more susceptable to the Greens than to the fisherman - this is an inevitable consequence of power being localted far from those involved.       We might even find that, though the Haida have enough independence from Canada to do this themselves, the Scots would be prevented by EU "environmental" rules from doing the same.That would be shocking.      Technologically it  is clear that the Scottish & UK fishing industry could be revived, That we could save the Scottish fishing industry - probably not increasing it 40 fold but certainly bringing it a long way back to where it used to be. If that were to mean Britain quitting the EU, or indeed, if Britain remained in, A Scottish indpendence differing from Mr Salmond's sort by not being within the EU might be a price worth paying.

Comments:
Russ George was trying for years to do this
experiment in different areas of the world's
oceans and wants to fund it by selling carbon
credits. Repeatedly blocked by different
governments, he has finally managed to do the
largest experiment of this type, but the
Canadian government now say he didn't inform
them the right way, and would have blocked it.
As ocean fertilization to sequester carbon is
classified as geoengineering, on which a cabal
of the UN on bio-diversity apparently imposed a
moratorium (2010). While the ban is dubious at
best, and probably doesn't apply to ocean
fertilization, as biodiversity is not affected, in
practice it is sufficient to scare governments
from getting into the controversy of allowing
ocean fertilization
http://www.scientificamerican.com/article.cfm?id=at-un-convention-groups-push
Incidentally, the definition of geoengineering
(carbon capture) and the wording used (affect
biodiversity) means the ban probably includes
rainforest restoration (involving carbon credits)
as saving species from extinction does affect
biodiversity.
Coastal erosion, and rivers provide a certain
level of trace minerals, and nutrients, and the
continental shelf also allows access to minerals
and nutrients in relatively shallow seas, so it is
generally only deep ocean that is suitable for
iron fertilization, and it is only certain areas
which have other nutrients available, but are iron
deficient.
I actually live a couple of miles away from a
stream which used to be "polluted" from old iron
workings. While unsightly, the rusty water
ensured there was plenty of iron available in
coastal waters. Of course, the stream has been
cleaned up, sewage discharge reduced, and
industry is no longer permitted to discharge
significant levels of effluent/fertilizers. Schemes
like those may mean that coastal waters are
relatively nutrient poor nowadays, though still
fairly productive. It is open ocean which is often
quite unproductive that fertilization is most
suited to.

As we are not concerned with carbon capture here, we can distance ourselves from the "ban" on geo-engineering. The carbon capture element is in creating a massive algal bloom - basically in the hope that the algae will die, rot and sink before it can be eaten. We want the food to be eaten. To provide food for fish (and whales), it would be much better to try producing a sustained boost in algal growth by smaller, regular fertilization. The more abundant algae would then already be in place to benefit from subsequent fertilization. I would also lean towards using powdered iron ore rather than iron sulfate. Iron sulfate has been used in the past experiments because it is soluble in water, and immediately biologically available. However, the naturally occurring ores are likely to have a more gradual effect as the iron has to react before it is biologically available - like the volcanic ash, or the iron from Saharan dust in the Atlantic, so might have less objection from "environmentalists" as it is a natural substance.
So, after identifying a suitable area for the experiment, I would think that one tonne of powdered iron ore dispersed each month (by a fishing boat which monitors the current fish stocks at that location by catching them) over a ten year time frame would allow the results to be sensibly evaluated.

So the people claiming we have to prevenmt catastrophic global warming want to make illegal any attempt to do so which does not destroy technological civilisation. Proving what their real agenda is.

The UN Charter is quite specific that it has no right to override national sovereignty. This is being ignored (eg the Libyan war) and there should be no compromise on it because it is the road to a world totalitarian government.

John McCarthy said, this would be worse for human progress than an all out nuclear war and this example strongly suggests he was right.