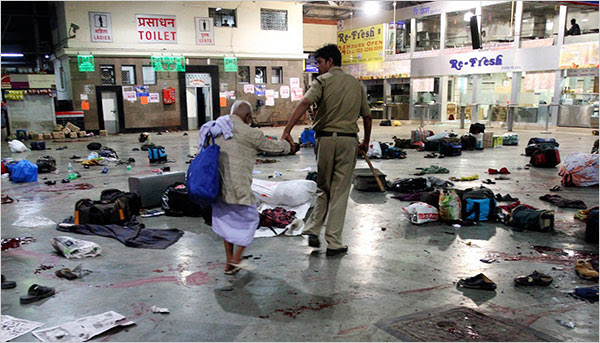 So what exactly happened. Just heard the radio today claiming there had been 10 terrorists which seems improbably small for an attack which involved 5 sites at once, though technically if they were acting in pairs that could maybe just be done but other estimates of 20-30 sound more likely.

The International Herald Tribune says "The police said 14 officers had been killed in the city, along with nine gunmen. Nine suspects had been taken into custody, they said." but there is clearly much confusion & early suspects may just be people in the wrong place. Another possibility is that a lot of them may have just dropped their weapons & faded into the night. Again the IHT says "His team also discovered a gunman's backpack, which contained dried fruit, 400 rounds of AK-47 ammunition, four grenades, Indian and American money, and seven credit cards from some of the world's leading banks. The pack also had a national identity card from the island of Mauritius, off the southeastern coast of Africa." The money, credit cards & ID certainly suggest an intention to get away. This attack has certainly been very different from the suicide bombers & car bombers previously seen & despite the psychological effect of such a change bombs would probably have killed more, so I suspect this was not a suicide attack. Had the attack gone off & the attackers escaped the terror effect would have been much greater.

As for how the attack started. The most descriptive article comes from the Guardian.

"...inflatable dinghies, according to Indian navy sources quoted by the Headlines Today TV news channel, were launched from a larger vessel, the MV Alfa, which arrived near Mumbai sometime yesterday and anchored offshore a distance from India's financial capital.

According to TV reports, the navy seized one Gemini craft laden with ammunition, as well as satellite phone, which could give vital clues about the attackers.

The navy, the news channel reported, became suspicious of the ship only on intercepting wireless communications in the region after the lethal assault began around 9.40pm (4.10pm GMT) last night.

By this time the vessel had left the vicinity of Mumbai. When first reported by the news channel today, the MV Alfa was said to be off the Gujarat coast and heading towards Pakistan. The navy was reported to be in pursuit of the ship, although this could not be independently verified.

"It was around 9.15 last night when I saw a speedboat with eight men on board come close to the shore," a man told Times Now TV today. The man appeared to be a resident of the Colaba fishermen's village, minutes away from the Taj Mahal, one of two luxury hotels in Mumbai taken over by the terrorists.

"Six young men with large bags came ashore, after which the two who remained in the boat started the outboard motor again and sped off," he added. "They were fair, chikna (well-off) and looked around 20, 22, 25 years old. They said they were students. When we tried to find out what they were doing, they spoke very aggressively, and I got scared."

...."There is no question that the armed men who landed in south Mumbai in the Gemini boats came from a larger boat anchored off shore," said retired Rear Admiral Raja Menon, a strategic affairs expert. "The larger boat left without waiting for the men to return. The armed men were on a one-way ticket."
There may be a lot of exaggeration in this but certainly we have seen pictures of the military style inflatable boats left on the shore.

On the other hand the identification of the mother ship seems wrong (possibly that they successfully disguised themselves as a legitimate ship), for the Times of India says "Navy officials confirmed that the Coast Guard also intercepted another ship by the same name, MV Alfa, on Thursday night near Alang in Gujarat. "The Ukrainian crew was detained for questioning. The Gujarat police had their custody," said officials. The vessel and crew were later released."
Mumbai is 500 miles south of Pakistan so it looks highly probable the mother ship came from there & should be possible to trace. We have heard that some of the terrorists were British born but we have also heard that that is not the case.

Now comes the investigation. Assuming (latest rumour) 9 bodies & 1 captured it will certainly be possible to trace their origin. By DNA for ethnicity & by bone & tooth isotope concentrations for where they grew up & by interrogation for who dunnit. My guess (& everybody else's) is that it was a fairly large & well organised Al Quaeda group based in Pakistan having at least a nod from Pakistan's secret service. The targeting of westerners fits al Quaeda's agenda but it also fits a national interest in damaging India's economy which is fast outstripping Pakistan's. Pakistan's secret service did play a major part in organising the Taliban back when al Quaeda was moving from our freedom fighting ally in Bosnia & Kosovo to the enemy that attacked New York & some sympathies clearly remain.

Sarajevo was once famous as the site of the killing of the Archduke of Austria which started WW 1. On that occasion best guess is that Serbia's secret service had given a nod but not informed their political masters. On this occasion I think, bearing in mind that both India & Pakistan are nuclear powers, it is important that the international community speak together & if the evidence is as I suspect, demands that Pakistan clear out its terrorists, extraditing some to India & possibly including some secret service officers if the evidence points that way. The alternative should not be war (though it might include some beefing up of India's defences) but it should be an international blockade & sanctions. Democracies are much more susceptible to such sanctions than dictatorships where the dictator (as in the case of Saddam or during the "siege" of Sarajevo) is barely effected & may make a lot of money out of their control of smuggling. Pakistan's faults are more those of a disorganised nationalist democracy than a dictatorship.

Comments:
Muslim martyrs typically blow themselves up. These gents may have believed they would receive some type of "support" that never arrived.

Strange how the armed Indian police chose not to shoot back in many cases.

The Indian police
won't really be trained for combat, will only be armed with pistols & are probably trained to hold fire if there are any civilians near.

However possibly most important is the sheer element of surprise. If you check out the career of Otto Skorzeny you will see how much advantage surprise can be.

We will have to se how the post mortum works out but if that claim about the combat pack containing money & fake ID is correct then suicide wasn't the aim.